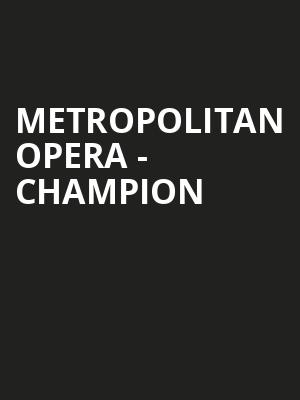 Champion is a self-reflective work not to be missed.

Following on from the history-making 2021/2022 premiere of his second opera, The Metropolitan Opera launch this brand new production of multi-grammy award winner Terrance Blanchard's debut opera in spring 2023, with direction from John Robinson and choreography by Camille A. Brown. Telling the story of the rise of boxer Emile Griffiths, two performers share the role, with bass-baritone Ryan Speedo Green as Griffith on his path to stardom and Eric Owens as the older, introspective Griffith looking back on his career.

Champion focuses on the fascinating life story of Emile Griffith, a professional boxer who went on to become a World Champion. Griffith, who was named Fighter of the Year by The Ring magazine and the Boxing Writers Association of America and number 33 on Ring Magazine's list of 80 greatest fighters of the past 80 years, has his compelling story excellently told through Blanchard's score and Michael Cristofer's libretto.