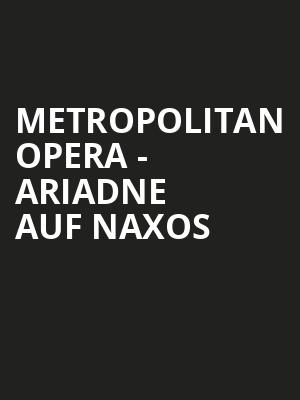 The opera within an opera!

An Opera Within An Opera

First performed at the Metropolitan Opera in 1962, Ariadne auf Naxos falls into two parts; the Prologue and the Opera. The Prologue will show you the backstage circumstances which lead up to the Opera, also described as an opera within an opera! The opera revolves around Ariadne, who is abandoned by her former lover on the desert island of Naxos, but she isn't alone - she has the nymphs Naiad, Dryad and Echo by her side. Ariadne mourns the loss of her lover and wishes for death to greet her, whilst the Nymphs try to cheer her up with their burlesque skills. Amidst trying to get Ariadne out of her dark state, a stranger comes to visit the island. Has Hermes, the messenger of death come to her call? Or perhaps someone else...

As of February 2010, Ariadne auf Naxos has performed at the Metropolitan Opera a total of 88 times!