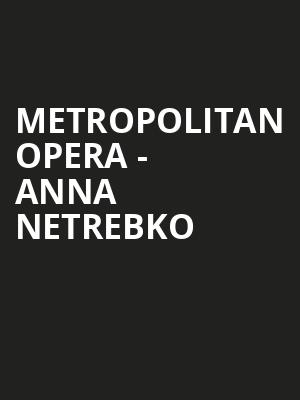 The inimitable operatic soprano joins forces with the Met Opera!

Join the Met Opera for an extra special concert performance when Russian superstar Anna Netrebko performs alongside the Met Orchestra and conductor Yannick Nezet-Seguin. Expect to hear some of her best-loved pieces, offering audiences a glimpse of her impressive talents and range. Netrebko is also due to perform in the 2021/22 Met productions of 'Le Nozze di Figaro' and 'Turandot'.

A lyric and coloratura soprano of great renown, Anna Netrebko's career beginnings read like an opera. Working as a janitor at Saint Petersburg's Mariinksy Theatre, she was discovered by iconic conductor Valery Gergiev, who became her vocal mentor. After her acclaimed 1995 debut as Susanna in the Marriage of Figaro, her penchant for compelling characterisations, dark, soaring voice and charismatic stage presence ensured starring roles in operas across the globe.