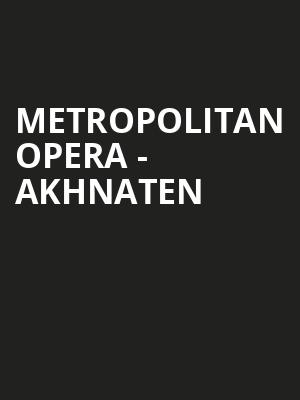 Philip Glass's 1983 masterpiece is born anew in this blockbuster staging from Phelim McDermott. Setting pulses racing with visionary effects, acrobats and performers, discover the story of one of Egypt's most revolutionary Pharaohs. Alongside his wife Nefertiti, Akhnaten changed the landscape of his kingdom. The third of the minimalist composer's portrait trilogy, this fantastic new production stars Anthony Roth Constanzo and Rihan Chaieb, conducted by Karen Kamensek.

The operatic dialogue was composed using various texts taken from ancient letters, hymns, inscriptions, and prayers; to add to the historic authenticity the opera is sung in Hebrew, Egyptian, and Akkadian. Centered on the life and religious beliefs of the titular pharaoh, from the early years of his reign in Thebes, all the way to the modern-day, where his ghost and that of queen Nefertiti mourn their ruined city.

Sung in English with Met titles in English, German, Spanish and Italian

I agree that the "steampunk" elements of some of the costuming simply didn't... more