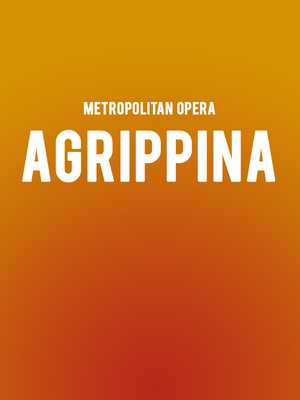 A timely tale about the pursuit of power

All is not well in Ancient Rome. Emperor Claudius is feared lost at sea and his unscrupulous wife, Agrippina is already scheming to get her son Nero on the throne. But when the news comes that Claudius is alive and meaning to pass on his position to his savior Otho, Agrippina is plunged into a web of treachery, intrigue, and betrayal that she must cut down to realize her ambitions for her spoiled son. Marking its Met Opera debut in 2020, don't miss George Frideric Handel's darkly comic tale of the pursuit of power!

Created by Sir David McVicar in 2007, this impressive production moves the action from antiquity to the present day, where its themes remain as pertinent today as they did in 1709. With Joyce DiDonato Agrippina, this exciting premiere is conducted by Harry Bicket.

Three hours and 34 minutes with one intermission