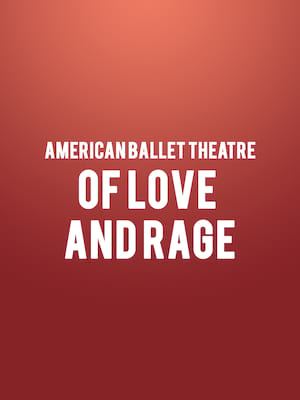 Of Love and Rage will connect the past with the present, introducing audiences to a Greek mythological tale that reflects the ever-present emotions of man - jealousy, love, and rage.

Why See American Ballet Theatre - Of Love and Rage?

Of Love and Rage The World Premiere

Celebrated dance maker and ABT artist-in-residence Alexei Ratmansky unveils a breathtaking world premiere this summer. Based on the ancient Greek novel Callirhoe, Of Love and Rage is set to music by Soviet Armenian composer Aram Katchaturian and grounded in Guillaume Gallienne's highly expressive French theater philosophy. The contemporary interpretation explores the human emotions of love, rage, and jealousy whilst also incorporating elements of Greek drama like the ensemble Chorus role.

Acknowledged as the oldest surviving novel ever written, Callirhoe chronicles the mad and mythical journey of the beauteous titular daughter of Hermocrates, the king of the Sicilian city Syracuse. After marrying the handsome Chaereas, her husband is tricked into believing she has betrayed him, and he kicks her with such violence that she falls unconscious. Believing her to be dead, Chaereas entombs Callirhoe until she is discovered by pirates. Whisked away on a whirlwind odyssey, Callirhoe comes face to face with war, deception and the triumphant nature of love.

I saw the world premiere at The Segerstrom theater and it was unbelievable.... more

Sound good to you? Share this page on social media and let your friends know about American Ballet Theatre - Of Love and Rage at Metropolitan Opera House.