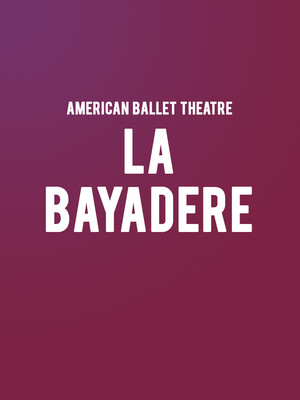 You have to be a real nit-picker to find anything wrong with American Ballet Theatre's lavish production of "La Bayadere."

Glittering and beguiling, La Bayadere is a consummate example of the Romantic ideal in action as eternally pledged love follows the central couple through this life and the next, dreams and tragedy. Featuring one of classical ballet's most beloved and bewitching excepts that introduces the world of the ghostly maidens, 'The Kingdom of the Shades', this supernatural love story never fails to dazzle and thrill.

Set in the exotic climes of India, the story follows the temple dancer Nikiya and her archrival, the envious Gamzatti. The two rivals vie for the affections of the warrior Solor, who has sworn his love to the heroine Nikiya, yet a dreadful fate awaits the young lovers when Nikiya's scorned suitor the High Brahmin plots with Gamzatti to end Nikiya's life, resulting in the famous 'Kingdom of the Shades' scene.

First created in 1877, this version from Natalia Makarova was first danced by the American Ballet Theatre in 1980 and has become of the consummate productions, known all over the world.

Sound good to you? Share this page on social media and let your friends know about American Ballet Theatre - La Bayadere at Metropolitan Opera House.