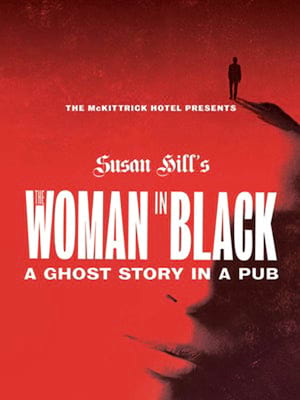 The Woman in Black remains one of British theatre's biggest - and scariest - hits.

Why See Woman in Black?

For three decades, the Woman in Black has delivered thrills, chills and theatrical horror on the West End, becoming London's longest-running show in the process. The enduring ghost play, based on the 1983 gothic novel by Susan Hill, first spooked audiences in a pub four years later before becoming a runaway success still performed today. Returning to its roots, the story finds new life at the Mckittrick Hotel's hidden pub new during an immersive new production helmed by the show's original director Robin Herford.

Performed entirely by two actors, The Woman In Black begins with a journey. Junior solicitor Arthur Kipps makes his way to the small rural town of Crythin Gifford to attend the funeral of one of his law firm's clients. At the sorrowful affair, he spies a woman, all in black, with a wasted face. When he asks the locals who she is, their reluctance spurs Arthur on to unravel her mystery, to his own terrible cost.

Suneet Ashburn: “Made me jump out of my skin”

I’d seen this play on the West End but it still scared me senseless.... more

Sound good to you? Share this page on social media and let your friends know about Woman in Black at Mckittrick Hotel.