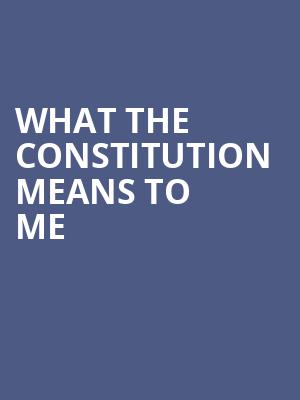 What the Constitution Means To Me

It presents the US constitution as profoundly flawed, but capable of improvement. The promise of a more just, more equal union has not been foreclosed. But a more perfect solo show? Broadway won't see one for years.

Why See What the Constitution Means To Me?

Hailed as one of the most important plays to grace Broadway! Heidi Schreck's compelling debut play What The Constitution Means To Me garnered much critical acclaim, as well as a Pulitzer, Lucille Lortel, Drama League, Outer Critics Circle, Drama Desk awards, and two Tony Award nominations. First starting its revolution during an Off-Broadway stint in the fall of 2018, this buzzworthy production will finally tour North America in 2021! Don't miss it!

At a time when the politics du jour may leave many feeling confused, outraged, and uncertain of the future, Schreck turns back the clocks and revisits her 15-year-old self at a time when she found a way to earn her college tuition by winning the National Constitutional debate competitions. With wit, humor, and an enquiring mind, she brings new life to the text that shaped modern America whilst simultaneously shining a light on its democratic failings.

What Is What The Constitution Means To Me About?

Whilst written in the Obama era, What The Constitution Means To Me is as topical and necessary as ever. Originally performed by regular Off-Broadway actor Schreck, it recreates one of the American Legion halls she traveled to in her teenage years, where she earned accolades for Casting Spells: The Crucible Of The Constitution.

Whilst sunny and optimistic in her yellow blazer, she traces the stories of four generations of women in her family and their direct relationship with the constitution, how it omitted and forsook them, something still happening to women today. Comedy, drama, memoir, and debate collide in a thought-provoking whirlwind brought deftly together by Schreck's magnetic personal charm and intelligent writing. Prepare to laugh, cry and contemplate long after the curtains come down.

Approximately one hour and 50 minutes, with no intermission

Schreck is deeply connected to this material and her delivery makes you feel as if she is telling this story to you for the very first time.

Seen What the Constitution Means To Me? Loved it? Hated it?

Sound good to you? Share this page on social media and let your friends know about What the Constitution Means To Me at Mccarter Theatre Center.