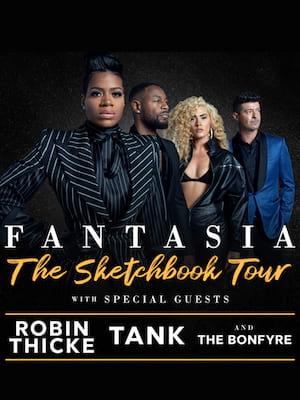 Few singers have better rapport with their audiences than the platinum-selling Fantasia.

After first finding fame as the winner of 2004's American Idol, Fantasia Barrino has gone on to experience numerous successes. About to release her seventh album, "Sketchbook", the R&B star is hitting the road in a brand new tour! Joining her along the way will be a plethora of exciting artists including, Tank, Robin Thicke, and The Bonfyre!

Fantasia's debut single "I Believe" landed at number one on the Billboard Hot 100. Her debut 2004 album "Free Yourself" went certified platinum and gained her three Grammy nominations, making her the third most successful American Idol winner in the history of the show.

Fantasia has battled life's hardships and is ready to sing and perform again. She has sold millions of records, has had a New York Times bestselling memoir with her book 'Life Is Not a Fairy Tale' and won a Grammy for Best Female R&B Vocal Performance in 2011. Her persistence, strength and show-stopping vocals have made her a household name with a sturdy fan base and a true superstar.

Sound good to you? Share this page on social media and let your friends know about Fantasia Barrino at Theater at Madison Square Garden.