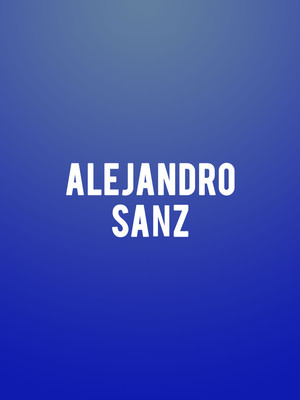 One of Spain's biggest pop stars, he is a first-rate balladeer who has gradually expanded his reach, experimenting with the rich rhythms that have long underpinned even his gentlest love songs.

Amongst his many accolades, Alejandro Sanz is one of the most commercially successful Spanish singers of all time thanks to his prolific outpouring of smash hit romantic ballads during the 1990s. Expanding from a home grown icon to an internationally-recognised latin music phenomenon, mainstream triumph came calling with the release of his 1997 breakthrough album Mas, catapulting the heartthrob into constant world tours and collaborations with the likes of Shakira and Alicia Keys.

Whilst he trades in songs of romance, longing and tenderness, his trademark rhythmic passion, syncopation and experimental spirit are never far to be found. Fusing together the sizzling flavors of reggaeton, flamenco, R&B, funk and jazz with polished pop production, the crooner brings it all together with a distinctive and emotive smoky vocal, redolent of Sting, Michael Bolton and Rod Stewart.

Sang all extremely estranged songs I had never heard more

Sound good to you? Share this page on social media and let your friends know about Alejandro Sanz at Theater at Madison Square Garden.