Sorry! You missed A View From the Bridge at Lyceum Theater 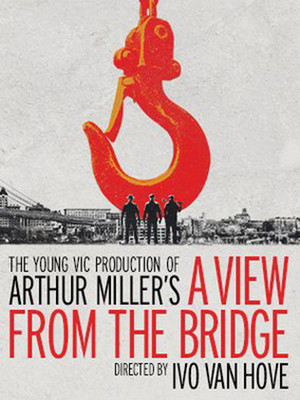 A View From the Bridge

Magnificent...At the end of its uninterrupted two hours, you are wrung out, scooped out and so exhausted that you're wide awake. Mr. Strong's is the most powerful single performance you're likely to see this year.

Why See A View From the Bridge?

The Young Vic's acclaimed staging of Arthur Miller's A View From the Bridge transfers to Broadway this fall. Starring the Bafta-nominated Mark Strong (Tinker Tailor Soldier Spy, Kingsman: The Secret Service), this production won three Olivier Awards during its West End run earlier this year, including Best Actor for Strong and Best Revival.

Foregoing the original's 1950's setting, experimental Belgian director Ivo van Hove places the play's action on a bare, black stage, caging in the piece's cloying tension and claustrophobia. The UK's leading theatre critic, Charles Spencer of The Telegraph, called it "one of the most powerful productions of a Miller play I have ever seen." Among the rest of the original cast joining Strong are Olivier winner Nicola Walker and Phoebe Fox.

What is A View From the Bridge About?

Eddie Carbone eeks out an existence by working the docks in 1950's Brooklyn, where he lives with his wife Beatrice and her young niece Catherine. Now a teenager, Catherine is blossoming into womanhood, illicitng a sexual longing in Eddie which he does his best to repress. His inner turmoil is forced to the surface by the arrival of two illegal Italian immigrants into the house, one of whom catches Catherine's eye, driving Eddie to try and assert his dominance.

One hour and 55 minutes, no intermission

I was blown away by the play, the acting and its interpretation. Arthur... more

Sound good to you? Share this page on social media and let your friends know about A View From the Bridge at Lyceum Theater.