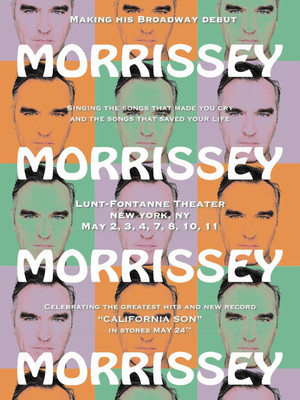 For the first time in his career, Morrissey is heading to Broadway!

For the first time in his extraordinary career, Morrissey is heading to Broadway! This is a once in a lifetime opportunity for you to see the star take to the stage like never before. This exciting performance will see Morrissey reflecting on his expansive career, from his early days as the frontman of a rockband, to his successful solo career and new record 'California Son'. Make sure you don't miss this legendary experience of Morrissey on Broadway.

Having flourished as a solo artist since the demise of The Smiths, Moz has produced classic albums like Vivia Hate and Vauxhall and I. In 2014, he released the critically acclaimed World Peace Is None of Your Business, a cacophonous compilation in which his lyrical genius, black humor and artistic integrity shines.

Aside from music, he's been a fervent and often outspoken (see above) animal rights activist. Whilst his politics might be somewhat interesting, he still inspires a devotion in his fans like no other, a commitment he repays in kind up on stage. While this will be the perfect opportunity to road test his newer material, older solo work and some classics from The Smiths catalog are sure to make an appearance.

Seen Morrissey? Loved it? Hated it?

Sound good to you? Share this page on social media and let your friends know about Morrissey at Lunt Fontanne Theater.