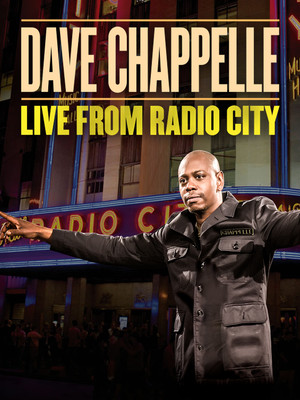 Magnetically compelling... If there are comics with more onstage charisma than Dave Chappelle, I haven't seen them.

Now extended through to July 20!

Dave Chappelle is making his Broadway debut this July as he heads to the Lunt Fontanne Theatre for five nights only! As one of the world's most successful comedians, Dave Chappelle is accredited as the inspiration to many of the globe's biggest stars. Much to the delight of his fans, Chapelle returned to the fray with a bang, after a short hiatus, in 2017 when he released four comedy specials on Netflix!

From hilarious sketches to routines that challenge race, Chappelle's anecdotal, warm and nuanced style is sure to keep you laughing all the way home. This unique run of comedy shows is part of the Lunt Fontanne's Broadway Series, which has seen the likes of Morrisey and Yanni take up one-week residencies at the Broadway venue.

Beginning his comedy career in 1991 Chappelle quickly made a name for himself on the New York comedy circuit. Gaining popularity at an unprecedented pace Chappelle hit the big time with Chappelle's Show on Comedy Central in 2003. Featuring a range of different comedy sketches the Chappelle's Show garnered the star two Emmy nominations. However, the overwhelming popularity took its toll on the comedian. Becoming angry and upset at the direction his beloved show was going, Dave Chappelle quit and headed off to South Africa for some much-needed rest and reflection.

Over the next half decade, Chappelle made a few rare TV and stand-up appearances until 2013 when he returned to the comedy circuit! Since 2017 Chappelle's career has hit milestone after milestone, winning two Emmy awards and two Grammy awards for his TV appearances and comedy albums. Don't miss your chance to see this undisputed comedy star on stage!

Chappelle kills on Broadway.. Been a fan for a while thru the ups and downs.... more

Sound good to you? Share this page on social media and let your friends know about Dave Chappelle at Lunt Fontanne Theater.