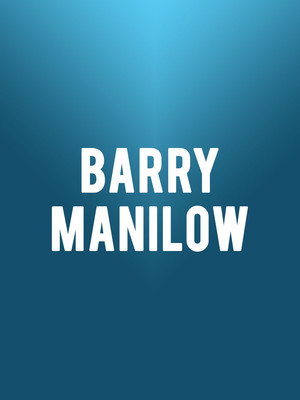 Manilow... is funny, endearing and reaches into his catalogue to reveal that there is more to him than mega-selling schmaltz

Why See Barry Manilow on Broadway?

The One & Only Barry Manilow

One of the smoothest, most soulful crooners ever to grace the stage, Barry Alan Manilow worked his way from the once mean streets of Brooklyn to the upper echelons of show business thanks to his tireless work ethic, silky vocals and endless charm. Accepted at the prestigious Juilliard School of Music, he moonlighted whilst studying in the CBS mailroom, eventually becoming a musical director for the TV broadcasting giant and establishing himself as the jingle king behind many well known brands, from McDonald's to Dr. Pepper.

Thanks to a chance meeting with the one and only Bette Midler in 1971, Manilow became her closest musical collaborator and their relationship paved the way for not only Midler's first two albums but for Manilow's own career as an artist. Just three years later he released the career-defining mega hit of a ballad that was Mandy, hitting number one in the charts. From then on out Manilow's melodic midas touch ensured hit after hit, including beloved classics Copacabana, I Write The Songs and Looks Like We Made It, which influenced the sale of more than 85 million records worldwide, making the icon one of the best selling recording artists of all time.

Taking A Bite Out of the Big Apple

Don't miss a chance to see this living legend do what he does best when he returns to Broadway for a special residency at the Lunt-Fontanne this summer! Approaching his octogenarian years, he's showing no signs of slowing down, heading to the Big Apple whilst his 2019 Las Vegas residency continues. Expect enough glitz, glamour, glittery jackets and consummate showmanship to put Liberace to shame when the one and only Barry Manilow casts his spell on the Great White Way.

I haven’t seen Barry Manilow in 10 years and WOW! He sounds amazing.... more

Great show - We had a fun time!! more

Sound good to you? Share this page on social media and let your friends know about Barry Manilow on Broadway at Lunt Fontanne Theater.