Sorry! You missed Under My Skin at Little Shubert Theater 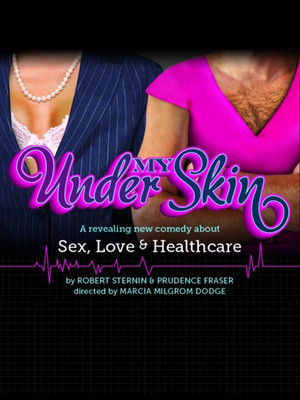 This zany look at love, sex, death and healthcare will have you screaming with laughter.

Why See Under My Skin?

Under My Skin is an uproarious comedy from the couple who co-wrote the hit TV series, "The Nanny" as well as "Who's The Boss?" The play premiered at the Pasadena Playhouse and now moves to the Big Apple to the Little Shubert Theatre!

The Off-Broadway production stars Tony Award-nominee Kerry Butler alongside Matt Walton in the two lead roles, and is directed by Kirsten Sanderson.

Under My Skin tells the laugh-out-loud story of successful but arrogant businessman Harrison Baddish (Walton) and shrill working single-mother Melody Dent (Butler) who switch bodies, thanks to the help of a rather clumsy angel.

The old adage "Walk a mile in another man's shoes" is taken to a whole new level as they begin to experience each others lives first-hand and find a lot more than just a new perspective along the way.

May not be suitable for audiences aged 16 years and under

One hour and 45 minutes, including intermission

Sound good to you? Share this page on social media and let your friends know about Under My Skin at Little Shubert Theater.