Sorry! You missed Caesar and Cleopatra at Lion Theatre 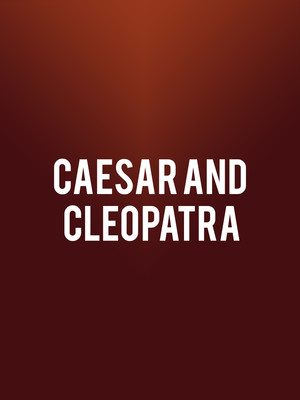 Its Caesar and Cleopatra but as not as Shakespeare or Hollywood cast them!

Why See Caesar and Cleopatra?

The tale of the most famous ancient romance between Roman empire leader Julius Caesar and Egyptian queen Cleopatra has inspired a multitude of retellings, from stage to silver screen. George Bernard Shaw's humorous take Caesar and Cleopatra is not often revived on stage, but the rollicking comedy is set to dazzle Off-Broadway thanks to a brand new production by the Gingold Theatrical Group, a company dedicated to promoting the humanitarian and activist ideals found in Shaw's work.

In Caesar and Cleopatra, Shaw satirises Shakespeare's flamboyant use of history and comments on the politics of his day, addressing women's rights, the empowerment of the disenfranchised, the weight of societal expectations, gender and sexual roles, and the dangers of imperialism. Shaw's masterful dialogue, wit and vivid charactertisations give fresh meaning to the fascinating relationship between the two historical figures.

Seen Caesar and Cleopatra? Loved it? Hated it?

Sound good to you? Share this page on social media and let your friends know about Caesar and Cleopatra at Lion Theatre.