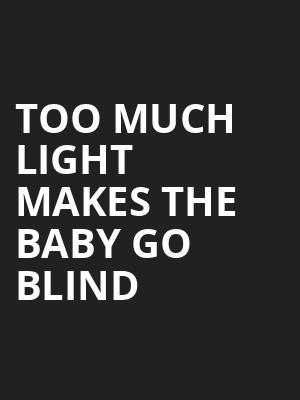 Too Much Light Makes the Baby Go Blind

This is a new production of the Neo-Futurists' signature show.

Why See Too Much Light Makes the Baby Go Blind?

The New York Neo-Futurists' ever-changing race-against-the-clock attempt to perform 30 plays in 60 minutes! Each performance features a different selection of original short plays (from over 1000) in random order-a non-illusory collage of the comic and tragic, the political and personal, the visceral and experimental, embracing chance, change, and chaos.

Produced by The New York Neo-Futurists

Seen Too Much Light Makes the Baby Go Blind? Loved it? Hated it?

Sound good to you? Share this page on social media and let your friends know about Too Much Light Makes the Baby Go Blind at Kraine Theater.