Sorry! You missed The Waverly Gallery at John Golden Theater 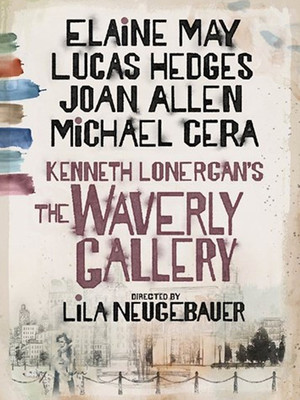 Why See The Waverly Gallery?

Elaine May returns to Broadway

A finalist for the Pulitzer Prize back in 2001, Kenneth Lonergan's The Waverly Gallery is receiving its Broadway debut this fall. Hosting a plethora of stars, such as Elaine May, Lucas Hedges and Michael Cera, the production will see Scott Rudin and Kenneth Lonergan team up once again to re-create the magic previously seen in This Is Our Youth and Margaret.

Taking on the role of Gladys, a feisty gallery owner who is battling Alzheimers, The Waverly Gallery will mark the first time Elaine May has appeared on Broadway since her debut in 1960. An old school lefty and long time social activist Gladys is battling to retain independence for her small gallery in Greenwich Village and the subsequent effect it has on her family, especially her grandson (Hedges).

Suitable for ages 12+. Children under 4 are not permitted in the theater

Seen The Waverly Gallery? Loved it? Hated it?

Sound good to you? Share this page on social media and let your friends know about The Waverly Gallery at John Golden Theater.