Sorry! You missed The Gin Game at John Golden Theater 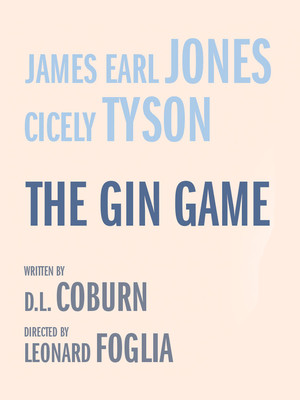 Despite its comic overtones, "The Gin Game" presents a clarifying portrait of the loneliness that may come with age...As the moving performances of Mr. Jones and Ms. Tyson bear out, playing the hands we are dealt with equanimity is much easier when we ar

Why See The Gin Game?

D.L. Coburn's Pulitzer Prize-winning play returns to Broadway with Tony winners James Earl Jones and Cicely Tyson in the lead roles. The pair have co-starred together numerous times over the years on television and the big screen, but their last theatrical collaboration was way back in 1966 in A Hand Is on the Gate.

Centred on an increasingly strained game of one-upmanship between two nursing home residents, The Gin Game is a tightly constructed two-hander which unveils its characters' hidden depths with masterful assuredness. It was last revived on the Great White Way in 1997, and featured Charles Durning and Julie Harris. This new production is directed by Leonard Foglia (Master Class).

Last seen on Broadway in this season's revival of You Can't Take It With You, Jones has a long and storied stage career, having won the Tony for Best Leading Actor twice for The Great White Hope and Fences. On the silver screen, he's featured in The Hunt for Red October, Sneakers, and of course, provided the deep and terrifying tones of Darth Vader in the original Star Wars trilogy.

Cicely Tyson wowed Broadway audiences in 2013 with her turn in the revival of Horton Foote's The Trip to Bountiful. Her portrayal of the aspirational Carrie Watts earned the New York actress a Tony and Drama Desk Award. She first came to nationwide attention in the 1970s when she played the title character in the sweeping, ground-breaking TV movie The Autobiography of Miss Jane Pitman.

What is The Gin Game About?

Contemptuous of their fellow residents, and too sharp-witted to settle for the organised entertainment on offer, two lonely nursing home residents are drawn together over a game of Gin Rummy. Over the course of three Sundays, their contest takes on a fractured atmosphere, swinging from flirtatious to hostile, as all the vulnerabilities that their conservative unbringings have repressed come gradually bubbling to the surface.

May not be suitable for those ages twelve and under

Two hours including one interval

Cicely Tyson will not be performing on December 5th and 6th

I saw "The Gin Game" over the weekend, and it was outstanding! Classic... more

Sound good to you? Share this page on social media and let your friends know about The Gin Game at John Golden Theater.