Sorry! You missed Mothers and Sons at John Golden Theater 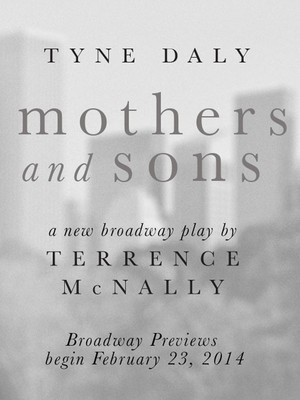 Why See Mothers and Sons?

Mothers and Sons is a brand new play by four-time Tony-winning playwright, Terrence McNally starring Tony and Emmy-winning actress Tyne Daly. It has been nominated for the 2014 Best Play Tony Award.

Daly plays a mother whose son died, much too young, of AIDS several years ago. The story follows her as she unexpectedly visits the home of her son's ex-partner (which now includes his new husband and their child), whom she hasn't seen in many years. There, she is forced to come to terms with how much society has changed without her, and the full life her son might have been able to enjoy.

This brand new Broadway play is a deeply compassionate and touching look at the transformative nature of forgiveness and the evolving definition of family, and stars Daly in a "tour de force" role. It is directed by Tony nominee Sheryl Kaller.

The play enjoyed its world-premiere engagement at the Bucks County Playhouse in Pennsylvania in Summer 2013.

May not be suitable for younger audiences.

Best Play Author: Terrence McNally
Best Performance by an Actress in a Leading Role in a Play Tyne Daly

This was a very real and emotional play . With superb acting to make it... more

I wasn't sure what to expect but we all really loved this show. The acting... more

Sound good to you? Share this page on social media and let your friends know about Mothers and Sons at John Golden Theater.