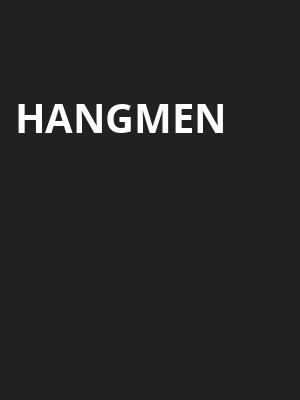 Images from a past production

Martin McDonagh's (In Bruges) genius has returned to the Great White Way with Hangmen, marking the playwright's seventh production on Broadway. Debuting at London's Royal Court Theatre in 2015 McDonagh's witty and macabre tale of the death of capital punishment in Great Britain transferred into the West End the same year, going onto garner the Olivier award for Best Play.

After its success across the pond, Hangmen played a sold-out off-Broadway run in 2018, which starred the likes of Johnny Flynn and Gaby French. Matthew Dunster, who directed the off-Broadway incarnation and West End production, will return to this Broadway premiere. This run will see Mark Addy (Game of Thrones) reprise his role as Harry, with Downton Abbey's Dan Stevens as Mooney, alongside Tracie Bennett, Ewen Bremner, John Hodgkinson, Richard Hollis, Gabby French and John Horton.

An Oscar award nominee and Golden Globe award winner, McDonagh is the mind behind such films as Three Billboards Outside Ebbing Missouri, In Bruges and Seven Psychopaths. Alongside his screenwriting, McDonagh has also penned plays such as The Pillowman, The Lieutenant of Inishmore and The Beauty Queen of Leenane.

Cemented as one of the world's most important writers don't miss your chance to see his genius come to theatrical life when Hangmen plays at the Golden Theatre for a strictly limited run!

What is Hangmen about?

In his small pub in Oldham in the north of England, Harry holds something of a local celebrity allure; his claim to fame? He is the second most well-known hangman in the country, second only to Albert Pierrepoint. But what is Harry to do on the day they've abolished hanging, and to a larger extent, the death penalty? Meandering in the background of the pub, behind the cub reporters and sycophantic pub regulars who are dying to hear Harry's reaction to the news, a stranger lurks, with a very different motive for his visit.

Hangmen is as black a comedy as they come

Currently riding a wave of critical acclaim that has bolstered it since its debut at the Royal Court Theatre, Hangmen is as black a comedy as they come; its ability to elicit shock and laughter at every turn gives new meaning to the term gallows humor.

Seen Hangmen? Loved it? Hated it?

Sound good to you? Share this page on social media and let your friends know about Hangmen at John Golden Theater.