Sorry! You missed A Delicate Balance at John Golden Theater 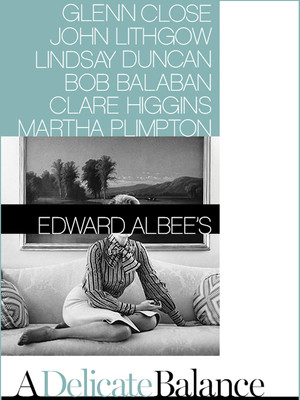 In this deluxe revival, an exemplary cast headed by Glenn Close, John Lithgow and Lindsay Duncan takes its cue from the title, revealing the drama's psychological complexity with exacting measures of wit, cruelty and contagious fear.

Why See A Delicate Balance?

Three-time Tony winner Glenn Close stars opposite John Lithgow in a revival of Edward Albee's moving family drama about an upper middle-class couple whose relationship - and personal capacity for empathy - is put to the test over the course of one weekend when their empty nest syndrome is suddenly (and quite brutally) reversed. Glenn Close was last seen on a Broadway stage back in 1995 when she performed in Sunset Boulevard, a performance which won her a Tony Award.

The dark comedy - which won Edward Albee a Pulitzer Prize for Drama - will enjoy a strictly limited run at the Golden Theatre, and feature Tony-winning director Pam MacKinnon (Who's Afraid of Virginia Woolf?) at the helm. The production also marks producer Scott Rudin's second blockbuster this season, after his sell-out production of A Raisin in the Sun, which starred Denzel Washington.

What is A Delicate Balance About?

Agnes (Close) and Tobias (Lithgow) are a married couple who struggle to maintain their equilibrium when they open up their home to friends and family in need, including their daughter whose fourth marriage has just ended, as well as Agnes' alcoholic sister.

Glenn Close was actually a stage actress before she made a name for herself on the silver screen, and has three Tony Awards to her name.

May not be suitable for younger audiences due to adult themes

Martha Plimpton as their daughter, Julia

Clare Higgins as their friend, Edna

Bob Balaban as their friend, Harry

Frances McGarry: “A World off balance”

Sound good to you? Share this page on social media and let your friends know about A Delicate Balance at John Golden Theater.