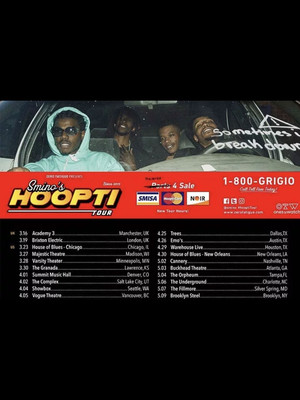 NOIR is a refreshing album that solidifies Smino as one of the most unique voices in hip hop.

Smino Hits The Road On The Hoopti Tour

Citing Kanye West and Andre 3000 as his biggest influences, St. Louis rapper cut his teeth in Chicago's underground scene as a founding member of the Zero Fatigue crew whilst simultaneously gaining the reputation as a valuable collaborator after appearances on Noname's debut mixtape Telefone and Saba's first album Bucket List Project. His collaborations continued on his own critically acclaimed debut blkswn, which dropped in early 2017, and his sophomore effort Noir, released in late 20108.

Fusing together a melodic style of rapping with funk and soul-tinged samples, beats and soundscapes, Smino brings his songs together with a versatile voice, doubling, harmonizing, shrieking, whispering, mumbling and announcing witty lyrics and playful alliterations in his own unique way. Exploring his past and African-American heritage, NOIR is autobiographical, unapologetic and pushes creative boundaries in bold new ways. Catch Smino's as he hits the road with this fresh material on the Hoopti 2019 tour.

Seen Smino? Loved it? Hated it?

Sound good to you? Share this page on social media and let your friends know about Smino at Irving Plaza.