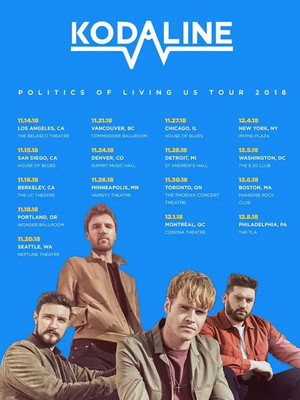 Kodaline illustrate all the ingredients for greatness, with many a swooning chorus to invoke a thousand festival lighters held aloft.

Radio-friendly rockers Kodaline formed in middle school in the working-class town of Swords, Dublin, honing their stadium-filling skills over the years under different guises. Their big dreams, determination and knack for creating soaring, melodic anthems translated into international success with the release of their multi-platinum debut album In A Perfect World in 2013. 5 years later, the high-flying quartet are gearing up for the August 2018 release of their third album Politics of Living. Don't miss hit single Follow Your Fire and other new songs during the Politics of Living US Tour this winter.

No strangers to selling out the world's biggest, most historic venues (highlights include London's Brixton Academy and New York's Bowery Ballroom), Kodaline reaches a diverse cross-section of fans with their instantly-relatable, romance and nostalgia-filled pop, pulling off electric live shows filled with an optimistic, feel-good energy that calls to mind Coldplay in their colorful prime. The Love Like This hitmakers certainly have a similar, stellar career trajectory ahead of them.

Sound good to you? Share this page on social media and let your friends know about Kodaline at Irving Plaza.