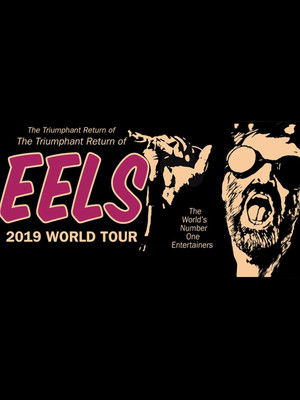 The Eels hit the road with their Deconstruction tour!

Since 1996 breakthrough album 'Beautiful Freak' Eels have enchanted with a melodic indie rock with movie producers getting them on board for films like Shrek, American Beauty and Yes Man. This year sees the band return to the road in support of their twelfth studio album, Deconstruction, which was released April 6, 2018, and was their first album in nearly four years!

As the Eels embark on their world tour, they take their recognizable sound with them. Known for music which tells story's of death, family and lost love; new album Deconstruction seems to have more an inspirational vibe about it, due to it being about rebuilding your life and looking back at what went wrong.

Expect to hear tracks "Premonition", "Bone Dry" and "Today Is The Day" when Eels come to a town near you.

What a blast!! Mark E and the Crew used phenomenal musicianship and razor... more

In short the Eels were great. However, the sound system at Emos was a bust. more

Sound good to you? Share this page on social media and let your friends know about Eels at Irving Plaza.