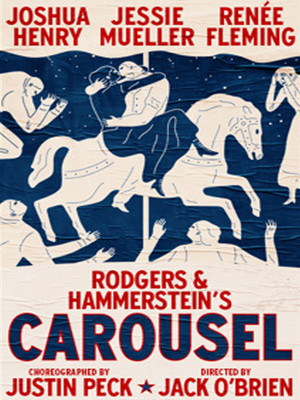 The real spinning carousel in this production is love. That, for better and worse, is what makes nature churn - and the world go round - in this show's blissful, anguished universe.

This Star-Studded Revival Must Close September 16

One of the finest musicals of Broadway's golden age, and Richard Rodgers favorite of his own works, Carousel is a top to bottom crowd-pleaser, a musically sophisticated show that spans both decades and dimensions. Among the scores many iconic numbers are 'You'll Never Walk Alone' and 'June is Bustin' Out All Over'. The story centers on the destructive but ultimately redemptive romance between Billy Bigelow and Julie Jordan, that continues even after Billy is dead.

What is Carousel About?

After a whirlwind romance, hot-headed carousel barker Billy Bigelow and factory worker Julie Jordan tie the knot, but not before they both lose their jobs. Desperate for money, Billy reverts back to his old life of crime, falling in with his pal Jigger Craigin, and together they plot to rob Julie's former boss, mill owner Mr. Bascombe. The robbery does not go according to plan - Mr. Bascombe draws a gun on the pair and Jigger flees, leaving Billy cornered and surely facing a long stretch in prison. Utterly defeated, Billy turns a knife upon himself to avoid capture.

Fifteen years later, Billy is given the chance to repair the damage he has done, and returns to earth from 'up there' to make amends with Julie.

Two hours and 45 minute, including one intermission

The dance is breathtaking and demonstrates how the cycle of destruction will keep occurring unless a change is made.

Carousel's return to Broadway could not be timelier - the iconic Rodgers and Hammerstein musical explores domestic violence in Maine in the late 19th century as well as prejudice, jealousy and control.

Ron B.: “I expected alot and received Much More ”

Forever an ardent fan of the engaging score from Carousel as a child, I... more

Sound good to you? Share this page on social media and let your friends know about Carousel at Imperial Theater.