Sorry! You missed Ian McKellen On Stage at Hudson Theatre 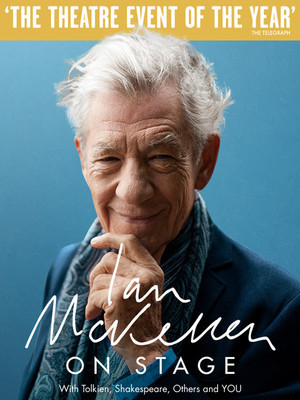 Warmth, wit and wizardry. In a line of 20th century legends including Gielgud and Olivier. Come one, come all and marvel.

Why See Ian McKellen On Stage?

For One Night Only!

After celebrating his 80th birthday with an extensive 80 date UK Tour, the legendary Sir Ian McKellen is bringing his acclaimed one-man show to Broadway...for one night only! This fascinating, funny and extra special performance sees the theater, TV and movie veteran perform some of his most celebrated work as well as sharing personal anecdotes from his illustrious career. From Gandalf to King Lear, McKellen does it all, don't miss it!

Directed by Sean Mathias this unique performance of Ian McKellen On Stage will be in benefit of the nonprofit organization, Only Make Believe, which creates interactive theater for critically ill and disabled children.

The Tony, Golden Globe and six-time Olivier winner made his professional debut in 1961 at the Belgrade Theatre in a production of A Man Of All Seasons, making his first West End appearance in 1965's A Scent of Flowers. From then McKellen was a regular on the British stage, with standout performances at the Edinburgh Fringe and the Royal Shakespeare Company cementing him as one of the country's most acclaimed actors before a certain wizard's hat and staff catapulted him to international stardom - and he's never looked back.

Sound good to you? Share this page on social media and let your friends know about Ian McKellen On Stage at Hudson Theatre.