Sorry! You missed What the Constitution Means to Me at Helen Hayes Theater 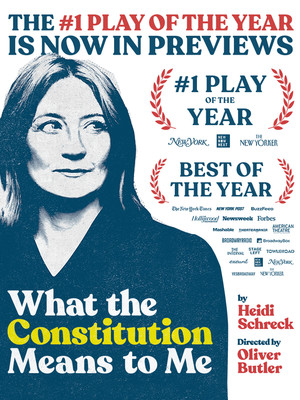 What the Constitution Means to Me

It is not just the best play to open on Broadway so far this season, but also the most important

Why See What the Constitution Means to Me?

Heidi Schreck's (2019 Tony Award Nominee for Best Performance by an Actress in a Leading Role in a Play and 2019 Drama Desk Nominee for Outstanding Actress in a Play) adept exploration of women's role in America transfers to the main stem after its acclaimed Off-Broadway run. What the Constitution Means To Me weaves together political and personal histories to show how women's rights have shifted over the course of four generations. Following its debut Off-Broadway in 2018, it was named number one play of the year by both New York Magazine and The New Yorker. This strictly limited Broadway run is directed by Oliver Butler.

What is Constitution About?

Having paid for college tuition through winning constitutional debates as a teenager, Obie-winner Heidi Schreck knows a thing or two about America's founding document. Here she brings her teenage self to the stage, alongside other women from her family tree, creating a lively and funny conversation about rights granted and rights withheld.

1 hour and 40 minutes with no intermission.

Schreck is deeply connected to this material and her delivery makes you feel as if she is telling this story to you for the very first time.

Sound good to you? Share this page on social media and let your friends know about What the Constitution Means to Me at Helen Hayes Theater.