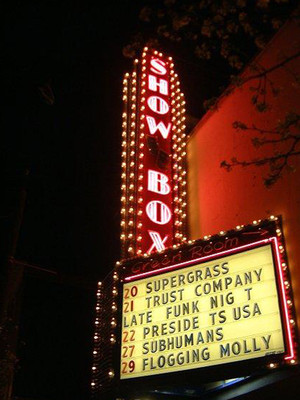 You can catch True Crime Obsessed at Showbox Theater in Seattle, showing Jun 20, 2020 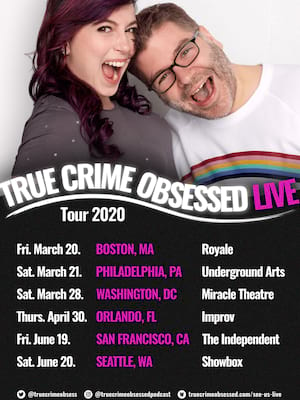 Hosts Patrick and Gillian have the requisite chemistry required for any good podcast. They have the perfect balance of entertainment, analysis, and humor needed to properly dissect a true crime podcast.

In the podcast world, true crime and comedy often live side-by-side, a heady cocktail made popular by the likes of My Favorite Murder and All Killa No Filla. Finding their niche, Patrick Hinds and Gillian Pensavalle's weekly podcast release recaps popular true crime documentaries with a dash of sass, plenty of humor and a 'well-timed garbage bell' that highlights the extra-garbage people at the center of shows like Wild Wild Country, Jesus Camp and There's Something Wrong With Diane.

Now the critically acclaimed show hits the road for the first time on a hotly anticipated North American tour. Following the structure of the recorded version, the duo will deliberate and discuss a popular true crime case backed up by a documentary. Mulling over the controversy, facts and often ridiculous coincidences of the cases, their wit and comic timing add a layer of black comedy to the mix. At their forthcoming Boston and Philly shows, they'll be discussing the disappearance of Maura Murray with a few special guests.

Sound good to you? Share this page on social media and let your friends know about True Crime Obsessed at Helen Hayes Theater.