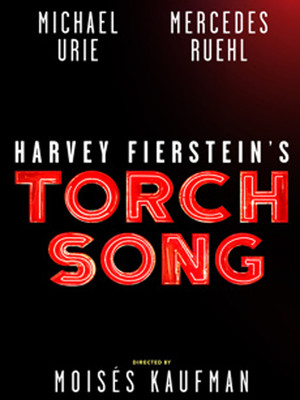 In the exquisite new Broadway revival, Michael Urie establishes himself as a fearless and compelling leading man

After a critically acclaimed run off-Broadway last year, Harvey Fierstein's epic Torch Song is receiving its Broadway transfer this coming fall. Stars of the show, Michael Urie and Mercedes Ruehl, are set to return to reprise their roles in this touching drama.

First premiering Off-Off Broadway in 1978 Torch Song received its first Broadway run in 1982 when it ran for a whopping 1,222 performances, earning Tony awards for Best Play and Best Actor in Play (Harvey Fierstein), before it was adapted for the silver screen in 1988. Playing at the newly reopened Hayes Theatre, Torch Song pays homage to its first Broadway run when it played the venue (then called the Little Theatre) back in 1982.

What is Torch Song about?

Centered around Arnold, a gay jewish drag star and torch singer, Torch Song takes us on a journey as Arnold searches for love, purpose and family. In this four hour epic the play focusses on three different stages of Arnold's life, as he battles bigotry, heartbreak and the experience of building a family.

Two hours and 40 minutes, with one intermission

Images have been taken from the 2017 off-Broadway production.

Sound good to you? Share this page on social media and let your friends know about Torch Song at Helen Hayes Theater.