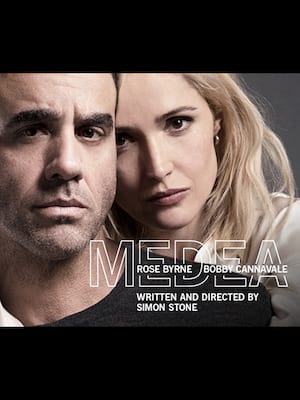 Real-life power couple Rose Byrne and Bobby Cannavale collaborate once more as Simon Stone's stunning contemporary re-imagining of the Greek tragedy plays at the Brooklyn Academy of Music. Premiering in 2014 at the International Theatre Amsterdam and recently enjoying a successful run at London's Barbican theatre, Stone's adaptation uses the true crime story of Debora Green, who poisoned her philandering husband and killed two of her children in 1995 to translate Euripedes classic play for modern audiences.

Bridesmaids and Damages star Byrne will play Anna, a doctor concerned with giving her family a fresh start following her husband's affair. Recently released from a psychiatric hospital, she becomes more and more desperate as it appears her husband is not as committed to change as she is, leading to catastrophic results for the whole family unit as her mind unravels further.

First written in 431 BCE, Medea is considered one of the finest Greek tragedies, with themes that translate across the centuries. It also holds the record for most Tony award wins for the central character with Judith Anderson winning in 1948, Zoe Caldwell in 1982, and Diana Rigg in 1994.

One hour and 20 minutes with no intermission

Written and directed by Simon Stone

Some of the acting was truly weak. It was hard to tell, though, how much... more

Sound good to you? Share this page on social media and let your friends know about Medea at BAM Harvey Lichtenstein Theater.