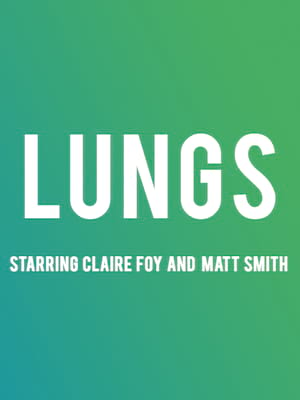 Hot off the back of a sold-out run at London's Old Vic, Duncan Macmillan's Lungs heads to New York! At the wheel will be The Crown's inimitable duo Claire Foy (who won the Golden Globe for her portrayal of a young Queen Elizabeth II) and Matt Smith. An emotional rollercoaster, Lungs is a smart-whip comedy that explores one married couple as they wrestle between the want for a child and the world's impending environmental doom.

Exploring 21st-century issues for 21st-century people, this two-hander dives into what makes us good people and the humanly desires that pull at our best intentions. Matthew Warchus returns to direct the piece which sees Foy and Smith transfer their tangible chemistry from screen to stage!

One hour and 20 mins with no intermission

Please, note that the images used are from the original London production.

It really is the stuff awards are made of, and is carried for nearly the entire 90 minutes by Foy’s exceptional talents and unrelenting energy.

Claire Foy and Matt Smith star as a couple in crisis in this climate crisis two-hander from Duncan Macmillan.

Seen Lungs? Loved it? Hated it?

Sound good to you? Share this page on social media and let your friends know about Lungs at BAM Harvey Lichtenstein Theater.