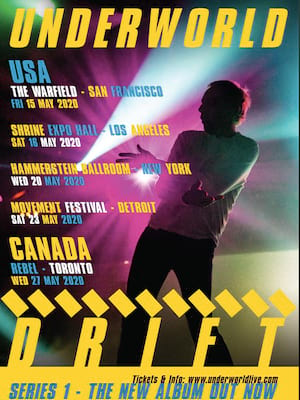 British electronic duo Underworld are on tour in North America this year, bringing their legendary progressive-house and techno hits across the pond in May. Known for club bangers including 'Born Slippy .NUXX' and critically acclaimed albums such as Dubnobasswithmyheadman and Second Toughest in the Infants, Underworld are still going strong in 2020 with last year's new album Drift Series 1.

Formed in the 80s by core duo Karl Hyde and Rick Smith, Underworld's career really took off after being heavily featured in the 1996 classic British film Trainspotting. Since then their enduring career has included writing multiple soundtracks, directing the music for the 2012 Summer Olympics opening ceremony and work with Brian Eno and Test among many others.

Sound good to you? Share this page on social media and let your friends know about Underworld at Hammerstein Ballroom.