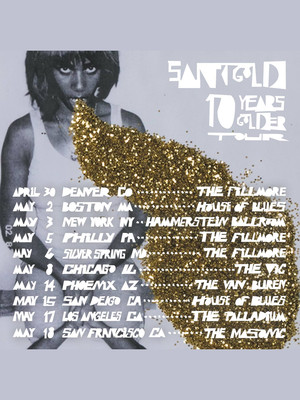 Singer and songwriter Santi White's (known as Santigold) familiarity with drawing relevant and enjoyable work from a range of influences makes her a unique figure on today's musical landscape. Now the star is hitting the road with her 10 Years Golder tour!

Hailing from Philadelphia Santigold burst onto the new wave scene with her debut album Santogold. Released in 2008 the young artist was awarded with much critical acclaim, going onto win the 2008 NME Award for Best Breakthrough Award and being nominated for a 2009 BRIT Awards for International Female Solo Artist. The 10 Years Golder Tour celebrates the tenth anniversary of this debut album, don't miss your chance to see it live!

With three albums (Santogold, Master of My Make-Believe and 99c) under her belt, Santigold returned in 2018 with her brand new mix-tape I Don't Wan't: The Gold Fire Sessions.

Please note that some venues are age restricted, please check with the venue before purchasing tickets.

Seen Santigold? Loved it? Hated it?

Sound good to you? Share this page on social media and let your friends know about Santigold at Hammerstein Ballroom.