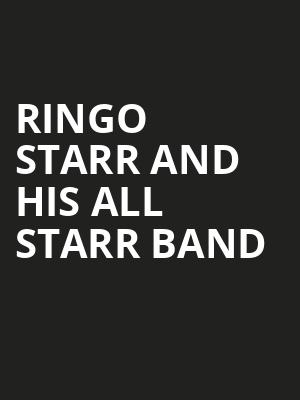 The legendary Ringo Starr is hitting the road with his All Starr Band.

Why See Ringo Starr And His All Starr Band?

Still rocking and rolling after all these years

Since beginning his career with The Beatles in the 1960s, Ringo Starr has been one of the world's brightest musical luminaries. He has enjoyed a successful and dynamic solo career as a singer, songwriter and drummer, an active musical collaborator, and as an actor.

Having shaped the popular music landscape for decades to come as one quarter of the Fab Four, Starr is a certified legend. Drawing inspiration from classic blues, soul, country, honky-tonk and rock 'n' roll and with, Ringo continues to play an important role in modern music with his solo recording and touring. The longest running All-Star line up came together in 2012 and have been touring with him ever since, this includes; Todd Rundgren, Gregg Rolie, Steve Lukather, Richard Page, Warren Ham and Gregg Bissonette!

Great show and the audience was well behaved and respectful to the performers... more

Susie Evans: “Ringo Starr and his His All Starr Band ”

What a beautiful night at Starlight listening to Ringo Starr and his... more

Sound good to you? Share this page on social media and let your friends know about Ringo Starr And His All Starr Band at Hackensack Meridian Health Theatre.