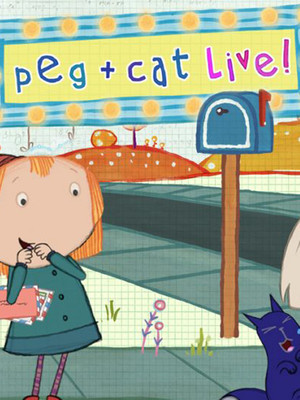 The creators have pulled off the impossible combo of programming irresistible for youngsters with enough snarky humor to make the experience enjoyable for grownups as well.

Why See Peg and Cat?

Peg and Cat the Musical

The award-winning kids show that presents fun ways to solve math problems, Peg and Cat goes live. With all of your favorite songs from the show and a few surprises, get ready to go on an exciting math themed adventure!

Peg and Cat are always solving math problems, which lead them to having a ton of fun. On stage this is no different and the duo face a messy situation that they have the solve with the help of the audience. Peg and Cat are tasked with sending a bunch of important letters but face a really large problem which they need to sort out together.

Since airing on television in 2013, the show has received numerous Daytime Emmy Awards and three Parents Choice Gold Awards.

Seen Peg and Cat? Loved it? Hated it?

Sound good to you? Share this page on social media and let your friends know about Peg and Cat at Hackensack Meridian Health Theatre.