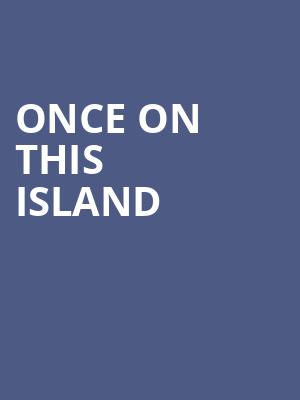 Once On This Island

Based on My Love, My Love by Rosa Guy

Why See Once On This Island?

A Caribbean-inspired take on The Little Mermaid, Once On This Island first premiered in 1990, this socially-aware fairytale musical went on to win critical acclaim on Broadway, and an Olivier Award when it transferred to London in 1994. Watch as the power of love unites people of all races and classes, thanks to one young woman's ultimate sacrifice.

Our story takes place in Haiti during the early 20th century, where the populace is heavily segregated between the darker-skinned peasants who struggle for a living, and the lighter-skinned rich people, descendants of the white plantation owners and their slaves. A young girl, Ti Moune is swept away from her village by a sudden flash flood, and the island gods save her life, foretelling that she has an important destiny.

Years later, and now a beautiful young woman, having been raised by a childless peasant couple, Ti Moune is yearning for adventure, and longs to be like the fairer-skinned rich folk who drive in fast cars on the island. Two of the gods use her as a pawn in a bet; what is more powerful, love or death?

Created by Lynn Ahrens and Stephen Flaherty
Based on the novel My Love, My Love by Rosa Guy

Seen Once On This Island? Loved it? Hated it?

Sound good to you? Share this page on social media and let your friends know about Once On This Island at Hackensack Meridian Health Theatre.