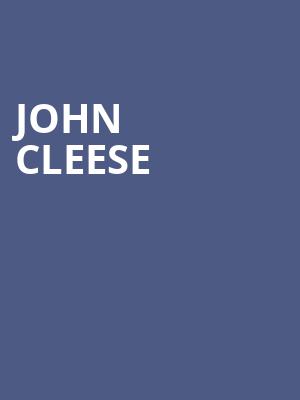 One of the most influential and important comedic voices in entertainment history.

an evening with john Cleese

Monty Python's legendary John Cleese returns to North America! This king of comedy will host an evening where the audience will be delighted to hear tales from the writer, actor and tall person's life and career, including memories of his time with the Pythons, work on the iconic Fawlty Towers and much much more!

Recognized as one of the most influential and important comedic voices in entertainment history, John Cleese is a founding member of Monty Python, and responsible for some of the most iconic films and television comedies to grace our screens. These include 'And Now For Something Completely Different', 'The Ruttles', 'Do Not Adjust Your Set', 'Life of Brian', 'Meaning of Life', and 'Fawlty Towers'. John has also starred in famed Hollywood hits such as 'A Fish Called Wanda', 'Silverado', 'Fierce Creatures', and multiple installments of both the Harry Potter and James Bond franchises.

This evening is rated PG, no children under 5 allowed.

Domenic: “Wonderful! If the damn thing had finished properly!”

It was lovely to see see Mr. Cleese regale us all with stories of his life,... more

Heathersneste: “Way better than most reviews will have you believe.”

First I want to say that there was no film in the beginning which many... more

Sound good to you? Share this page on social media and let your friends know about John Cleese at Hackensack Meridian Health Theatre.