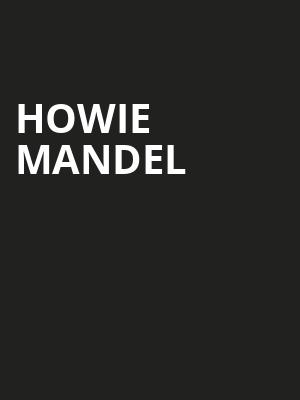 A constant force in show business for over 30 years!

The America's Got Talent judge and former Deal or No Deal host gets back to his roots on this new stand-up tour. From starring in St Elsewhere, to creating children's tv program Bobby's World, Mandel is a regular on both the talk show and comedy circuits, and is known for his infamous latex glove routine. A lifelong sufferer of OCD, ADHD as mysophobia (phobia of germs), Mandel has been vocal in raising awareness for these conditions. He often uses the various screened live incidents involving his mysophobia on America's Got Talent as material for his acts.

2009 saw the release of his memoir "Here's the Deal: Don't Touch Me". The book revealed his ongoing struggle with OCD and ADHD along with how it has affected his life and career and made the New York Times bestseller list on its first week and remained there for several weeks. Since 2013 he has executive produced the popular prank show "Deal With It".

Sound good to you? Share this page on social media and let your friends know about Howie Mandel at Hackensack Meridian Health Theatre.