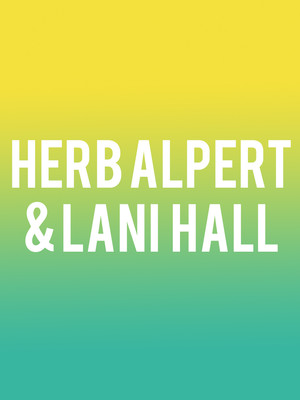 There is a certain satisfaction and energy that comes from playing the horn - a feeling that I am really in the moment.

This Guy's On Tour Again!

A passionate pioneer of the Tijuana sound, Herb Alpert's love for music began ages 8, when he discovered his natural flair for the trumpet. Fast forward over 60 years and Alpert is one of America's musical icons, an eight time Grammy winner (most recently in 2014), an artist, philanthropist and the only Rock and Roll Hall of Fame inductee to have entries, both as a singer and a composer. Now you can catch him and long time collaborator (and wife,) singer songwriter Lani Hall!

Expect to hear music from both their extensive back catalogues, from Lani's 22 multi language albums to their collaborative efforts, including American standards, new compositions and of course, a little bit of that classic Tijuana Brass, including Spanish Flea, Lonely Bull and many more!

Sound good to you? Share this page on social media and let your friends know about Herb Alpert & Lani Hall at Hackensack Meridian Health Theatre.