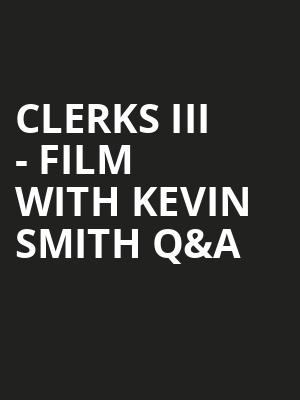 Photo by Geoffrey Moffett on Unsplash

Do you have that one with that guy who was in that movie that was out last year?

The King of the Nerds returns to the road this fall on 'The Convenience Tour', offering fans the opportunity to enjoy a pre-theatre screening of his newest movie, the hotly anticipated third visit to the Quick Stop; Clerks III. In addition to being the first to see what Randal, Dante, Jay, and Silent Bob are up to 16 years after Clerks II, the evening will include a Q&A with Smith. So get those questions ready!

With alchemy that captured the ennui of generation X, Kevin Smith was one of the most important indie film directors of the 90s, coming to everyone's attention with his lo-fi debut Clerks. Shot on a shoestring budget, the idiosyncratic black and white comedy launched Smith's career, which continued with acclaimed comedies like  Mallrats, Dogma and Chasing Amy, and more divisive works like the recent thrillers Tusk and Red State. Additionally, alongside his outspoken pal Jay, he's inhabited the role of Silent Bob in the duo's many pop-culture-inspired movies.

Sound good to you? Share this page on social media and let your friends know about Clerks III - Film with Kevin Smith Q&A at Hackensack Meridian Health Theatre.