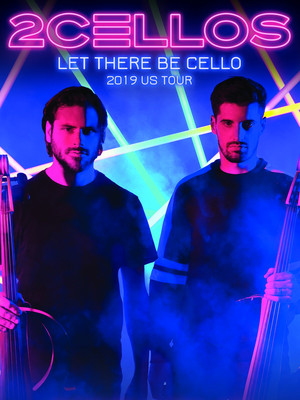 We always try to put our own spin on it, do something different with the song and present it to the people in a new and fresh way.

The overnight sensations 2Cellos have delighted many audiences the world over, with their unique and energetic performances of popular hits, from Nirvana to Kings of Leon. When their rendition of Michael Jackson's Smooth Criminal went viral on YouTube, they broke through and ended up catching a gig supporting Elton John on his tour. Now 2Cellos return to perform passionate pieces from their brand new album, Let There Be Cello!

The Croatian cello virtuosos Luka Sulic and Stjepan Hauser met at a master-class whilst still teenagers before completing their education at the prestigious Royal Academy in the UK. Whilst struggling to find work, they hit upon YouTube, where they quickly gained over a 3 million views in a week, and are now up to 10 million and counting! Since then, they have signed to Sony Masterworks and are now heading out on a new tour across the US.

Incredible show with 2 interactive and talented musicians!! A performance... more

Music fans of all genres can enjoy the classic gone rock and way over the... more

Sound good to you? Share this page on social media and let your friends know about 2Cellos at Hackensack Meridian Health Theatre.