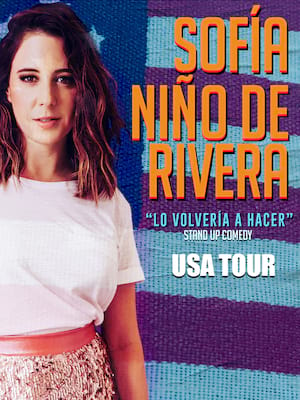 Mexico's brightest comedian heads out across the States

Sofia Nino de Rivera has been making waves in recent years, starring in the highly popular Spanish-language comedy series, Club De Cuervos on Netflix, Sofia has risen as one of Mexico's best comedians! After her own Netflix Spanish-speaking comedy special, the first to be had by a woman, Sofia heads out across Northern America bringing her wit with her for her Lo Volveria a Hacer tour!

After working in advertising until she was 28, Sofia decided to head in a new direction and become a comedian! Using her experience in the advertising world as inspiration, Sofia's intelligent stand-up routines have earned her worldwide recognition. In 2016 Sofia won Woman Of The Year in Mexico City, a year later the star was featured on a special episode of US talk show, Conan titled Conan Without Borders: Made In Mexico.

Sound good to you? Share this page on social media and let your friends know about Sofia Nino de Rivera at Gramercy Theatre.