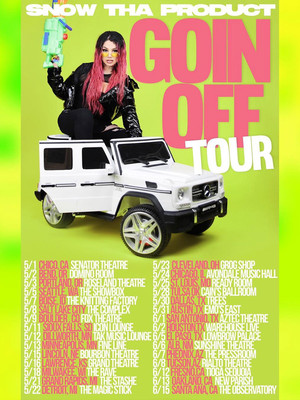 Snow Tha Product has electrified her devoted fan base for the last few years. Rocking packed out venues, appearing on sizzling ciphers and killing collabs, Snow is ready for her next step in the game.

Inspired by the Disney princess Snow White and a desire to keep her personal life separated from the music business, bilingual Mexican-American rapper Claudia Feliciano adopted the name Snow Tha Product before honing her skills in the Dallas-Forth worh underground hip hop scene. Attracting mix tape collaborations with the likes of Ty Dolla Sign and Tech N9ne, Feliciano stamped the mainstream with her heady juxtaposition of hard rhymes, tough-as-nails persona anb pop-tinged melodic hooks when she signed to Atlantic in 2013 and released career-defining singles 'Doing Fine', 'Holla' and 'Play'.

Whilst hip hop sadly may be a man's world still, Feliciano brings more ferocity and lyrical skill to the game than many of her male counterparts. Whilst embracing trends with radio-friendly, trap-inspired beats, she's anything but a mumble rapper. A gifted lyricist with knack for storytelling, her intricate lyrical and syllabic patterns allude to a satisfying sense of song craft even without polished production. Catch the up and coming star when she hits the road on the Goin Off Tour this spring and summer.

Sound good to you? Share this page on social media and let your friends know about Snow Tha Product at Gramercy Theatre.