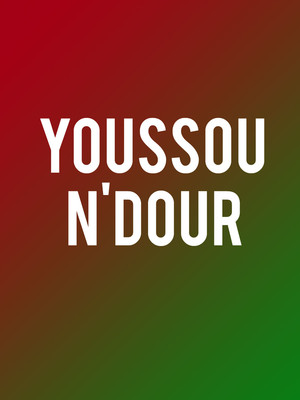 NDOUR has created a musical context that's as large with possibilities as his sinuous, spine tingling singing

Described by Rolling Stone in 2004 as Africa's 'most famous singer alive', Youssou N'Dour is the face and voice of Senegalese mbalax, a fusion of Western pop and jazz, infused with the traditional sabar drumming music of his country. In addition, N'Dour is also a noted politician and actor, having appeared in the 2006 movie Amazing Grace with Ioan Gruffudd.

His political ambitions have seen him stand for president, and later serving as the country's culture and tourism minister. He also works vociferously with Amnesty International, the UN, and UNICEF in order to tackle endemic problems within Senegal, championing social causes.

His musical collaborations have seen him work with a huge spectrum of stars including Peter Gabriel, Sting, Neneh Cherry, Paul Simon, and Bruce Springsteen. His latest tour in the States is a more poignant one this year, following the death of Senegalese drummer Doudou N'Diaye Rose.

Sound good to you? Share this page on social media and let your friends know about Youssou N'Dour at BAM Gilman Opera House.