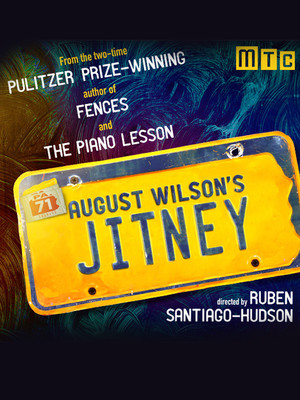 "Conversation sings and swings, bends and bounces and hits heaven smack in the clouds, in the glorious new production... Acted by an impeccably tuned ensemble, this early work from an American master makes you realise how much the New York theater has mi

August Wilson's 1979 two-act play from The American Century Cycle about a gypsy cab station arrives this December for its Broadway premiere, the last of the playwright's works to play the Main Stem. Helmed by actor/director Ruben Santiago-Hudson, this marks his third collaboration on a Wilson play, having previously won a Tony Award for his role in Seven Guitars. This play is celebrated for its ferocious and spirited dialogue between the very different characters, as well as the myriad subplots and relationships.

Leading the cast of this Broadway production are Andre Holland (The Knick, Moonlight) and Tony nominee Chisholm (Radio Golf).

The scene is set in Pennsylvania in 1977 at a dilapidated unlicensed cab station, on which local residents rely for cheap fairs, rather than the expensive regulated taxis. However this mutually beneficial agreement is threatened with the release of the station owner's son from jail; violence flares, secrets are leaked and the uneasy peace holding everyone together nearly breaks down.

In addition, the cab office building is due to be closed down for urban redevelopment; however the area's surrounding buildings that have already been closed have been forgotten for the promised work. Will our motley crew survive the threat of being pushed out in favor of gentrification? Or will the prodigal son finally stand up and fight for everybody his father's service stands for?

Seen Jitney? Loved it? Hated it?

Sound good to you? Share this page on social media and let your friends know about Jitney at Samuel J. Friedman Theatre.