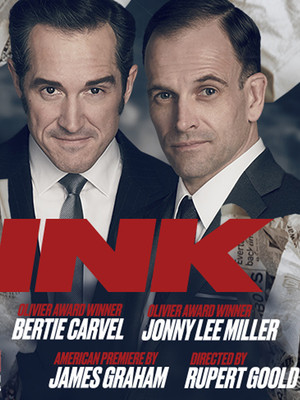 Nothing about Graham's unexpectedly seductive play is ever less than rousing. The show is hoisted even higher by...Goold, doing his best work

Long before Fox News or Fake News, one canny young Australian set out to shatter traditional media with his acquisition of a failing English tabloid, otherwise known as The Sun. With brash confidence and total irreverence, he revolutionized print media, gathering a cadre of hungry talent who stopped at nothing to shift copies, making the paper and that young man, Rupert Murdoch, the notorious figures they are today.

Playwright James Graham (Labour of Love, Quiz and Finding Neverland) presents a searing portrait of Murdoch at the time in this dark comedy of indelible resonance. Directed by Rupert Goold, this production comes direct from London's West End where it pulled in a cosmos of stars from the critics and an Olivier Award for Best Supporting Actor in a Play for original star Bertie Carvel (Matilda) - a feat he has replicated here by taking home the Tony Award for Best Performance by an Actor in a Featured Role in a Play!

Giving the people what they want, not what they actually need to know. That became the defining tenet of both the now-defunct News Of The World, and its daily sister paper, The Sun. Formerly known prior to 1964 as the Daily Herald; it became a tabloid in 1969 after it was purchased by Murdoch's News Corp. Graham's ruthless three hour epic examines the rise of the tabloid phenomenon in arresting and dazzling style. A must-see for journalists and readers alike, this biting new play will throw new light on the news tycoon and his controversial practices.

Audiences aged 12 and over due to adult themes

Two hours and 50 minutes with one intermission

Hold the front page on this one, INK will run and run!

Our West End Reviewer, Scarlet Fleetwood, saw this production of INK when it ran in London. Here's what she thought! "INK swallows you whole and spits you out in 1969, a time when a young Rupert Murdoch has just bought The Sun newspaper and plans to make

Seen INK? Loved it? Hated it?

Sound good to you? Share this page on social media and let your friends know about INK at Samuel J. Friedman Theatre.