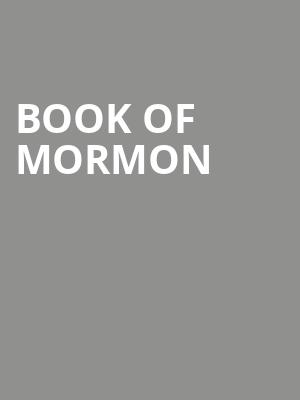 You'll laugh till it hurts

Why See Book of Mormon?

In 2011, following a storming reception at its Denver premiere, the four-time Emmy Award-winning creators of South Park, Trey Parker, and Matt Stone, gifted the world with this outrageously funny Broadway musical about a pair of mismatched Mormon missionaries sent on to a place that's about as far from Salt Lake City as you can get!

Replete with 19 original, hilarious songs and plenty of eyebrow-raising lines (and peppered with more than a handful of expletives), The Book of Mormon isn't for the faint-hearted or easily offended, but has already won over a whole new generation of musical theatre fans.

The Book of Mormon has had awards heaped upon it, earning 13 Tony nominations in 2012 and going to win nine of them including Best New Musical. In the same year, it also won four Drama Desk Awards, four Outer Critics Circle Awards, and even a Grammy Award in 2012! This smash-hit musical was written in collaboration with Robert Lopez, the Tony Award-winning writer of Avenue Q, and co-directed by Mr. Parker and three-time Tony nominee Casey Nicholaw (Spamalot, The Drowsy Chaperone).

What Is The Book of Mormon About?

'The greatest time of a Mormon kid's life is his mission,' sings Elder Kevin Price before finding out where and who with, his journey will begin. But things are not as the handsome and pious Elder Price predicted when he's paired up with the hapless and puppy-like Elder Cunningham and sent off to the wilds of ...UGANDA! Disneyland this isn't, boys.

Their adventure unfolds as Elders Price and Cunningham attempt to preach The Book Of Mormon to a Ugandan rural community that has been blighted by disease and ruled over by an evil warlord. Despite some truly cringe-worthy false starts and misunderstandings, they learn about themselves, the true meaning of friendship, and what their religion ultimately means to them.

The Book of Mormon is suitable for audiences aged 18 and upwards. Contains explicit language and sensitive themes throughout.

Two hours and 30 minutes with one 15 minute intermission

Best Performance by an Actress in a Featured Role in a Musical: Nikki M.James

Best Direction of a Musical: Casey Nicholaw and Trey Parker

Outstanding Director of a Musical

One of the best musicals I have EVER seen!

If heaven promises to "have it all", then The Book of Mormon is paradise on Broadway - populated with the naughty and nice. After all, this provocative production has been running since 2011 - making it one of New York's top attractions!

This performance was completely irreverent, only to be outdone by the atypical... more

Sound good to you? Share this page on social media and let your friends know about Book of Mormon at Eugene O'Neill Theatre.