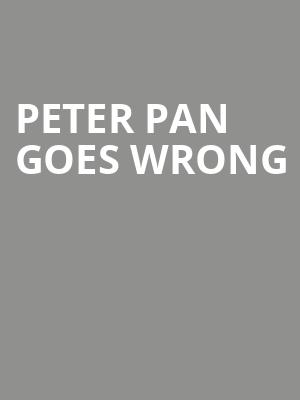 Images from the West End production and property of the company.

'This is not a pantomime!'

A mad-cap panto from the brains behind The Play That Goes Wrong is heading to Broadway! Oh dear, it looks as if the Cornley Polytechnic Drama Society is up to its old tricks again, only this time the clumsy theatre troupe have decided to take on J.M Barrie's beloved classic, in only the way that they can. Expect laughs a-plenty in this cleverly comedic production as they wreak havoc on a riotous journey to Neverland!

From Mischief Theatre, the brains behind the hilarious smash-hit The Play That Goes Wrong, Peter Pan Goes Wrong is another look at the disastrous company as they attempt to stage the tale of the boy who never grew up. It can't be that hard, can it... ? Don't miss another mischievous and highly enjoyable hit for kids and adults!

Suitable for ages 8 and above

Two hours and five minutes with one interval

The talent and athleticism of the cast is exceptional!

We've gone back to see whether or not it still stands up to last year - and you'll be in for a treat!

Sound good to you? Share this page on social media and let your friends know about Peter Pan Goes Wrong at Ethel Barrymore Theater.